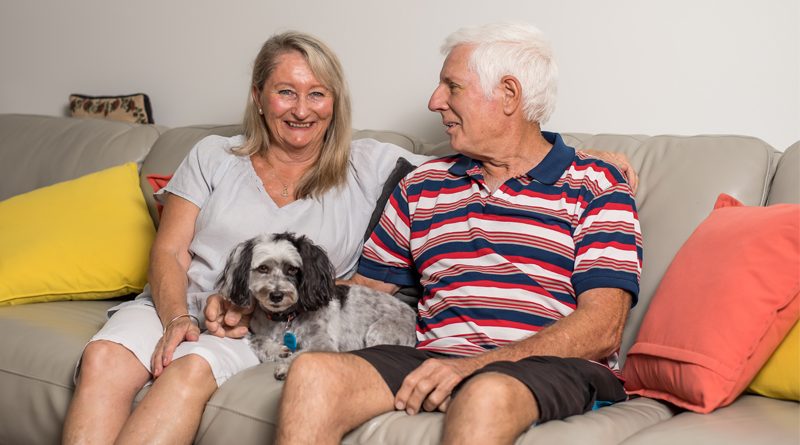 Downsizing to a retirement village or over-50s resort has a lot of attractions: freedom from home and garden maintenance, fewer rooms to clean, more time for family and friends. Moving from a large family house into a more compact home however can sound like a daunting prospect. Possessions tend to accumulate when you’ve lived in one place for a long time, especially if you have a lot of rooms to furnish. Resident Susan Stanbury (pictured above with her husband Ian) discusses her recent downsizing journey to a retirement community.

Retirement living offers a very popular lifestyle that more than 200,000 Australians currently enjoy. Many more would like to join them but are put off by the prospect of downsizing from their large family homes.

If you haven’t moved for years, or even decades, it can be hard to know where to start.

Luckily, Susan Stanbury, who recently moved into Buderim Gardens with her husband Ian, has some great advice for decluttering.

“If you haven’t used it for six months, it can go. It’s hard for a lot of people to know what to hang on to and what to let go but all those trinkets aren’t really necessary.

“It’s much easier to clean without a lot of clutter and easier to maintain,” she says. “We had a lot of things we didn’t use, like a big shed full of tools. The kids took what they wanted and we gave some things to charity.

“There’s nothing I regret giving away. It’s a case of looking forward, not behind, and planning what you’re going to do next.”

At 68 and 71, convenience is a greater priority than space for the couple. “You want air conditioning and all the mod cons at this age without the difficulty of maintenance,” Susan says.

The beauty of retirement living, Susan says, is that you have all the advantages of home ownership without the hard work.

“We had a large three-bedroom home that we built ourselves; it had very high ceilings and big windows but they were hard to clean,” she says.

Ian is just as happy to go minimalist and he’s not missing those tools. Knowing he’ll never have to pick one up again, is the icing on the cake for him.

“They completely refurbish the villas before you move in: new paint, new kitchen, everything. This place looked brand new when we moved in,” he says.

Since moving into their two-bedroom duplex, Susan and Ian are busier than ever but now they’re doing the things they like to do.

“Some people fear being bored in retirement, but I find there’s not enough hours in a day. I do a couple of lessons at the gym every day, get coffee, do yoga, music, art, I go shopping, to the beach.

“I love the rainforest and greenery; the location is fantastic. We’re minutes away from everything we need, everyone is so friendly, there’s always people around; it’s just a nice atmosphere,“ she says.

Situated near Mooloolaba Beach on the Sunshine Coast, Buderim Gardens is set on 60 acres of rainforest and parklands.

The village layout with variegated housing styles and lots of space between homes, is a big part of its appeal for the couple.

“It’s got great access to everything but it’s very quiet. It has the feel of a suburb more than a retirement village,” Ian says. “There’s little pockets of green space with benches; there’s no fences. It reminds me of a little English village,” Susan adds.

Settling into Buderim Gardens was “very easy” Susan says because of the way Lendlease managed the transition while the couple was still in the process of selling their old home.

“We couldn’t live here but all our furniture could be here until our home sale was settled, so we didn’t have to store it. It was really helpful.

“It’s a big decision to downsize but I’d recommend this place highly to anyone who is looking.

There’s a lot of benefits to be gained by coming into a village. It’s nice to be with like-minded people of a similar age and interests,“ Susan says.

“We wouldn’t want to be in a normal suburban situation with a lot of noise and traffic. Here I feel secure. I’d be quite happy on my own, if Ian was away. It’s a big plus.

“We’re very lucky. This is the best place to retire.”